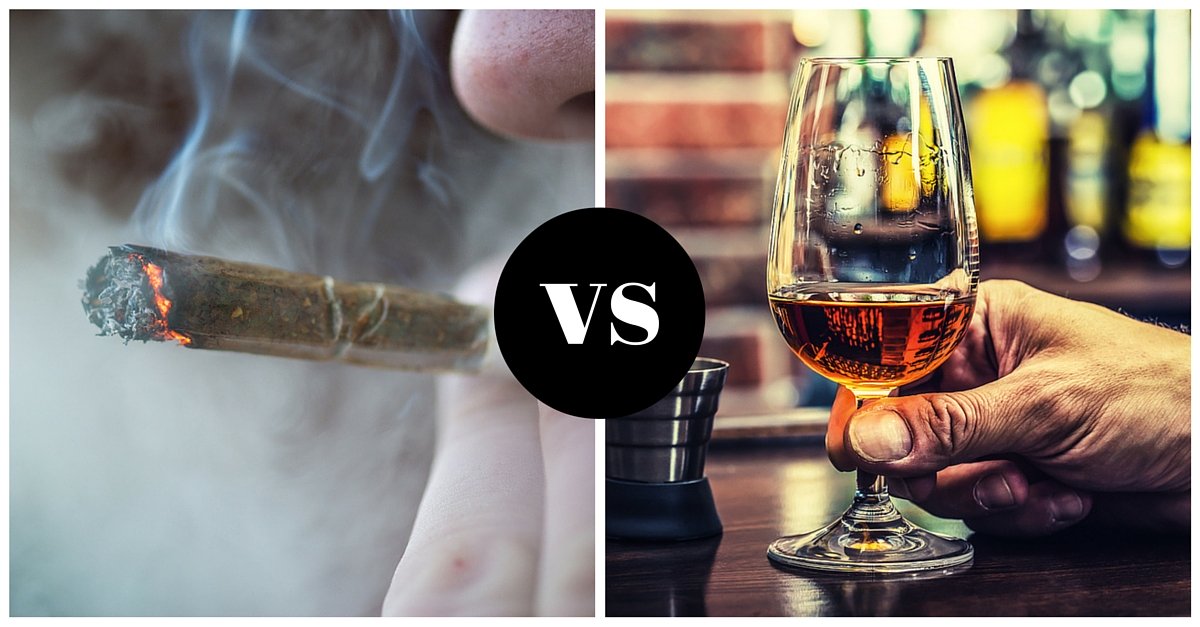 Before diving into the subject head forward, let me assure you that my findings are not to be generalized, and any similarity in my behavior and that of the marijuana and alcohol users is genuinely coincidental. However, I personally do not believe in coincidences and urge others to abandon such a superstitious belief.

First up is alcohol. Alcohol is certainly legal but like many legal and readily available substances is a subject of some serious abuse. By abuse, of course, I do not mean a group of young adults cussing at and slapping the shit out of the keg.

Alcohol is a powerful substance and alcohol abuse usually begins after a fifth shot or a tenth beer. Additionally, it is important to note that switching and mixing up alcoholic beverages is a sure way to feel its full effect and end up in court for the crime of abusing the bottle.

Everyone, of course, is familiar with other potentially dangerous effects of alcohol on the immune system and the body in general, thus they will not be mentioned for the sake of keeping the study lively and entertaining.

Alcohol is a paradoxical drug that usually makes you feel incredibly powerful, while, in fact, every shot you take pushes you closer towards the state of being powerless. The beginners of the drinking game have a lot lower tolerance than those of the veteran status, and will most likely disagree, claiming that alcohol makes them feel tired and sleepy, if anything. I agree with such conclusion as well, for I too was once a freshman in college and would surely claim my immunity to alcohol but, alas, would get drunk from a single beer.

On the one hand, alcohol is a fun and unifying substance, on the other, it is a serpent of the drug world. Last time I was in the company of amateur alcoholics, all we really talked about was how much we respected and loved each other.

It is important to note that we rarely talk to each other, when we are sober. If you are a fortunate drinker, then not only will you have fun and enjoy the process of alcohol consumption but you will surely have a story to tell the following morning. Just to make myself clear, the “story to tell” certainly does not include tales of penises drawn on your body or anything of that perverted sort.

An example of a story to tell would be something along the lines of what happened to me the last time I was drinking. I vaguely remember the events of that wretched evening but I do recall the entire group of my acquaintances splitting into smaller groups. Each group had a subject to discuss, examples being lively discussions about the meaning of life, the future, love and how to acquire it in the shortest time possible, preferably tonight.

I also remember chasing after a cat and when I finally got my dirty hands onto the animal, I could read deep regret and genuine fear in his eyes. However, I did not want to harm the beast, I just wanted to show my affection that I suddenly had for the hairy pussy.

I clearly remember waking up the following morning and going into the bathroom and after not finding the soap near the sink, I decided to open up on the drawers.

What happened next was a miracle because as soon as I opened the drawer the same cat that I was so tenderly hugging the previous night jumped out and ran for his dear life somewhere into the kitchen.

So far, the biggest drawback to alcohol is the fact that while you are having fun in the process, you will most likely not be able to remember every detail of all your endeavors. The following morning begins as a sort of a guessing game that takes you to unexpected places and memories.

The time before last, I remember waking up in the morning after this monstrosity of a party and not finding anyone in the house but myself. While such scenario may not bother too many people, I was personally frightened out of my wits. Imagine yourself starting a pleasant evening with close to a hundred people in a single house and waking up completely alone, not a soul in sight, including the people who actually occupy the abode.

On the flip side, the effects of alcohol will torment your body long after your initial wake up. In fact, your initial wake up will be a lot sooner than you expect, since alcohol converts into sugar while you sleep and kicks in heavily, waking you up hours before your desired time. When you wake up and still have a hard time sitting up straight, you are in for a treat.

The treat is usually a day of agony between sleep and waking, briefly interrupted by consumption of something greasy, unhealthy and fast. Not to say that sometimes you wake up during the night and wander around the house in search of something eatable to quickly consume.

In the morning your mouth is covered with peanut butter, bread crumbs and a spoon full of jelly is securely stuck in your pocket. These are just a few examples of another alcohol drawback – meanness.

When you are awoke sometime during the night and still searching for food, you rarely take into consideration not only the feelings of those who actually own the fridge and its contents but you completely disregard all ethical norms of food consumption. You rip up plastic bags instead of opening them, you cut a hole in the pizza box instead of simply lifting the box top, you even go as far as microwaving a steak and after it is done, commenting on its high quality and your exceptional cooking skills.

Overall, alcohol is very dangerous and a sure pathway to immorality but at the same time it usually gives us something to smile about the following morning. It is important to note that heavy machinery or automobiles should never be operated under the influence.

I say so because I have witnessed too many courageous souls who claimed that they “can drive from here to China” but instead would end up parallel parking the car in the garage.

Additionally, no projects such as, fixing something or doing something you meant to do for a long time, should be attempted while you are drinking. I have seen people “accidentally” driving forklifts into the swamps and their residences. I have witnessed “repairs” of brand new television sets and was once a participant in the game of racing a lawn mover to the nearest gas station, while drunk and blindfolded.

Therefore, alcohol is too be treated with all the respect it deserves and all the attention your liver and your wallet will require in the post drinking days.
Marijuana is a well known and a strictly forbidden substance that is very popular across continents and ages. Your experience usually begins with a slow drift away from the crisp state of being into something very deep and relaxing.

You might get the first laugh right away, yet after your high securely sets in your system, you are more than likely to be in for a treat. The treat is usually a night of laughing at something that is usually not worth your smile otherwise.

This state of being is of great importance because when you are high, you begin to perceive things differently from what they really are. Such perception is the key to understanding and employing the concept of wit.

However, one of early drawbacks of marijuana, besides it being illegal, is the fact that you quickly lose that circus train of thought and the next day usually question and try to understand what is it that was so funny last night.

At the same time, laughter is the emergency first aid, in the case of a bad high that some or most experienced during their years of smoking marijuana.

If you ever find yourself in the position of dangerous thinking and an elevated heart rate, it is usually best to call someone who smokes and let them talk you through it or simply turn on a comedy and step aboard the circus express.

Another negative aspect of marijuana is the possibility of highly moral reasoning on your part that might or might not prompt you to do something that you generally will avoid doing. If you are struggling to choose between the two girlfriends you are seeing, you are very likely to call them both and break it off with them.

On the more positive note, you might begin questioning your existence, God and other spiritual aspects of your being and the world around you. If you are with your girlfriend and she also just smoked, then it is very probable that both of you will end watching pornography and trying to imitate what you just saw in the bedroom.

However, both of you might get paranoid, more true if you are an occasional smoker, and begin to heavily air freshen not only your house but also the premises outside you front door, failing to stop and think for a moment that such actions might arouse more suspicions from your neighbors than a bad smell.

Overall, marijuana may be considered a safer alternative to alcohol. When you are high, you rarely dare to drive, unless, of course, you are too cheap to order something for delivery and just have to drive and pick it up. Marijuana will make you lazy in the productive way, and while you might be slower than usual you are safe and more than welcome to undertake any project that you believe requires your undivided attention.

Both drugs are certainly dangerous and fun in their own ways and should be treated with respect and all the necessary caution. The end.