If you are a regular marijuana user there is a good chance that you have already heard of CBD oil and all the benefits that it can provide. The substance has really made a splash in the health market over the past couple of years. However, what you might not know is that new scientific reports are showing that CBD hemp oil can be utilized to help with cannabis withdrawal.

Get An Understanding Of CBD Oil

Before you learn how CBD oil can help treat cannabis withdrawal you need to have a complete understanding of CBD oil and what it is. CBD is just one of the many compounds that are found within the cannabis plant. In fact, there are over a hundred compounds in a single cannabis plant at one time.

Yes, THC is one of the substances as well. THC is the psychoactive ingredient that actually gets you high. CBD is the natural occurring substance that possesses all of the medicinal benefits. CBD can be extracted from the plant. When extracted from the cannabis plant the CBD extraction will contain amounts of THC.

The thing is that the amounts of the THC will be so small that they won’t produce those psychoactive effects. The amounts usually range anywhere from 0.3 to 0.5 percent.

Marijuana Does Have Addictive Properties

It is the withdrawal symptoms that make it hard for these individuals to quite. When heavy cannabis users try to quit smoking they usually experience anxiety, mood swings and insomnia.  A study once published in the 90s stated that right around nine percent of heavy marijuana users become addict.

When you compare this to drugs like heroin and cocaine cannabis looks relatively non-habit forming, but it is most certainly addictive. 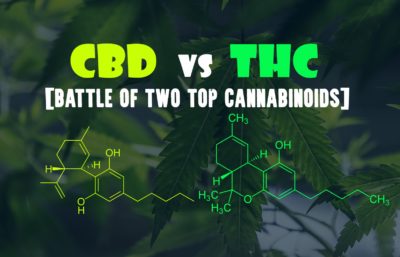 One of the things that make cannabis addiction so tough is that there is no medical treatment to help uses kick the addiction. At least opioid users have methadone and other alternatives to kick their habit. This is where the theory behind the use of CBD oil came from.

A study conducted by doctors in Sao Paulo, Brazil showed promising results. There was a 19-year old girl that was experiencing intense withdrawal symptoms when trying to kick her cannabis habit. She had started smoking daily since she was thirteen. Sometimes consuming several times a day.

The doctors issued her the CBD oil and her symptoms eased. Within just a matter of days she was able to kick her marijuana habit entirely.

With cannabis becoming legal for recreational use in more and more states it is now more important than ever to find a suitable cure for addiction. And, it looks like CBD oil is that solution.

CBD Oil Has The Power To Prevent Relapses

You would be surprised to learn just how much research there is out there backing the effectiveness of CBD oil for addiction. It is because of the unique way that the CBD interacts with the body’s endocannabinoid system that gives it such potent abilities.

After more and more positive studies starting showing up about how CBD oil can keep withdrawal symptoms at bay researchers started to delve into the ideal of using it the prevent relapses. One recent case study involving animal subjects that had been self-administering cannabis where issued CBD oil.

These animals where deprived of their stash and they had already been displaying the obvious signs of relapse like anxiety and impulsivity.

The researchers started administering the animals CBD oil once every 24 hours for a period of seven days and they made a profound discovery. The CBD oil not only eliminated the addict-like characteristics of anxiety and impulsivity, but it kept the subjects from relapsing for a period of five months.

The most amazing thing about this is that the CBD completely cleared from the brain and body of the subjects within three days, but they still did not relapse.

Sure, one study might not be enough to validate the substance as a suitable anti-relapse treatment for cannabis, but there is other proof out there. There are tons of other credible studies out there that claim the same positive results.

The lead researcher at Scripps Research Institute recently conducted his own study and he said that there was proof of principle that CBD could be a suitable anti-relapse treatment for cannabis.