I thought was time to do a full Xstream synthetic urine review, because of its position in the market.

It used to be really popular synthetic urine, but it’s not any more. Why is that? But people still buy it, which concerns me.

Some people I know have passed drug test using it, but others have failed. So is it because of them, or the formula?

The bottom line is that although it could still work, there are better brands out there, and I’m going to highlight some key reasons why you can’t trust it 100%.

So let’s take a look in detail at what Xstream urine is, why it’s falling behind other brands, and also take a look at synthetic urine that’s comparatively in price, but better in quality.

What Is Xstream Urine?

Xstream urine is a synthetic urine product used primarily to evade urine drug testing, although in common with all synthetic urine, it describes itself as a novelty/fetish product get around the American legal system.

The thing is, when you buy it, the marketing always suggests that although it’s not meant for evading a drug test, that it is capable of doing so:

“Xstream novelty synthetic urine for the fetish community and as a urine control for the calibration of testing equipment.”

So the claim that’s implicit is that it’s capable of calibrating urine testing equipment. So by default it should be able to pass a urine sample drug test.

Will Xstream Urine Work To Pass A Drug Test? 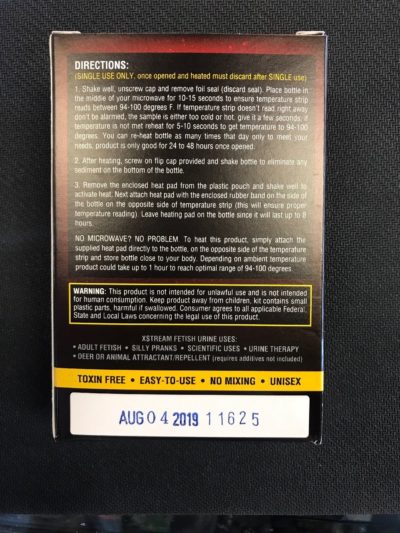 They added Uric acid and Urea, both key components of real urine.

What’s scary is that it obviously didn’t previously contain those, but apparently still got through drug testing.

On top of that, it contains creatinine, and amino acids, also present in a real sample.

But the reality is that drug testing has moved on as well. In the past, they just checked for the presence of drug metabolites.

Now they check for metabolites, but they also check in detail that the sample is genuine, by looking for the presence of key chemical components, plus artificial additives like preservatives.

Having said that, some people are reporting that it still passes a basic drug test.

So I’m guessing that some really cheap, basic, pre-employment drug testing in a small town, where smaller regional drug testing labs are used, could still be fooled.

But there are so many negative reviews of Xstream synthetic urine online now, and they are increasing all the time in comparison to positive reviews, that the updated formula is not enough.

It appears to me that it’s the presence of artificial substances which is catching this product out, something in it, like the preservatives used, are being detected by the labs.

So although it could work, it’s a bit like tossing a coin, which isn’t the sort of odds that I would be happy with.

Xstream synthetic urine is not a powder product. With some brands, you get powder, and you then mix the powder you get with it to create the sample.

Once mixed, those powder brands only have about the seven-day window to submit them.

So technically, an already liquid form synthetic urine should have a far longer shelf life, maybe a couple of years. However, for me, anything over about 12 months and you are risking your luck.

Another problem is that people seem to primarily buy Xstream from eBay and unfortunately a lot of the product on there is old. Which means it shelf life is short, and it could also be and old formula.

The answer to the question: does Xstream synthetic urine expire, is yes it does, and unfortunately a lot of people seem to get caught out by that. 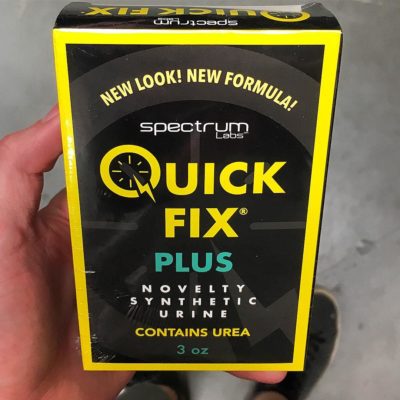 Now my conclusion for this Xstream synthetic urine review is that it’s not a completely dead duck.

I’ve had reports from people I trust that it has worked for them. But as I have said, a lot of people are getting caught out, and I suspect it’s because it contains unnatural ingredients that labs are starting to routinely check for.

On top of that, although it’s been updated, Xstream has only been updated to contain the basic ingredients already present in far superior synthetic urine products.

For an extra $15 you can get yourself a bottle of high quality Quick Fix 6.2 synthetic urine. It contains all the ingredients Xstream does, plus a more complex blend of natural ingredients, and it doesn’t use the more common preservatives.

You can buy the latest version of Quick Fix (6.2) here.

However, it’s better to spend a little bit more and get yourself a bottle of Sub Solution.

Sub Solution has the most complex blend on the market. It’s the synthetic urine that most closely mirrors the real thing. On top of that, it doesn’t contain the common preservatives like biocide, so it can’t be detected as a fake sample is easy.

The other winner is that it has a long shelf life. You can even check on their official website to make sure it’s genuine, and if it’s not, or it’s been supplied as an old formula or out of date through an authorized reseller, they will send you a replacement.

But for me, it’s the patented heat activator powder that makes Sub Solution a far better bet than Xstream, if you have the money to spend.

You don’t need a heating pad, or microwave. You just tap in the powder, shake it, and it agitates the liquid to the correct temperature, which you can check on the thermometer strip.

Once is at the correct temperature you can go and submit your sample. You can even sit in the testing room and double-check the temperature, and add a bit more powder to make sure that your sample is between 94-100 degrees Fahrenheit, the heat activator powder is that discreet and flexible, and works in 30 seconds.

You can get Sub Solution from testnegative for 80$.

So sure, if you don’t have any money, or you don’t care much about the test, then Xstream synthetic urine could actually still work.

If you want to make sure, and you have a bigger budget, then I would strongly recommend you go for Quick Fix or Sub Solution instead.