Herbal Clean is a company who has one of the most recognized names in the detox drink market. But their main detox drink, QCarbo has suffered from a poor reputation in recent years as other marijuana detox drinks have improved their formulas, leaving it left behind with a growing track record of failure.

So when Herbal Clean brought out a new detox drink called Ultra Eliminex, a lot of people including me looked at it with skepticism, especially with its high price point.

But the end of the day it’s whether it works or not. So I thought it was time to do a full Ultra Eliminex Review to get to the truth.

That big question is, of course, does Herbal Clean Ultra Eliminex work for a drug test, or is it just a more expensive version of QCarbo32 that will leave you in the position of losing your job?

Herbal Clean is a drug detox company with a wide range of products, drinks, and detox pills.

However, their product range is not widely regarded as high quality, with lots of people reporting failure using those products, resulting in them failing professional lab drug tests.

As they already produce Qcarbo, it’s good to be skeptical about the potential quality of their newer detox drink Ultra Eliminex.

But a lot of the vibe out there suggests that it actually does work. Its formula is different and more powerful than Qcarbo.

Also, Ultra Eliminex is a full 32oz detox drink specifically designed for heavier smokers, or users, and is capable of masking the toxins in even a heavier body mass, like me.

How Ultra Eliminex Works To “Detox” You

There’s a bit of confusion about how Ultra Eliminex works, which I think has been propagated partly from the marketing the company has done.

They inaccurately say it detoxes your system, giving the impression it’s a permanent detox. Looking at reviews from users on sites like Amazon, you see comments as I used it and weeks later I have still got weed metabolites in my system.

But that’s just showing that person’s ignorance of how a detox drink works. A detox drink does not detox you, it temporarily masks the toxins to give you a window of opportunity to pass a drug test successfully.

A good quality detox drink will flush the toxins lose in your system out through your bladder leaving it clean. That will give you clean urine for a few hours until the toxins attached to the body cells start to loosen and work their way into your urine flow again.

On top of that, a good quality detox drink will replace nutrients that are flushed out so that your sample is not rejected as diluted. But does Herbal Clean Ultra Eliminex achieve this?

How To Use Ultra Eliminex

Using a detox drink like Ultra Eliminex is pretty straightforward, and instructions are broadly the same every single one out there. The only difference is that some brands ask you to drink the same volume of liquid in water after consuming the drink itself.

In terms of how to use Ultra Eliminex, you should do the following about two hours before you go to the lab to submit your sample:

All I would say is that its obvious stopping taking stuff that will bring toxins in your body will also help, as well as exercising and eating healthily in the days leading up to your test.

Eliminex Review: Does it Work For A Drug Test?

Well, now we are onto the million-dollar question, does Ultra Eliminex work for a drug test?

I have personal experience with this, a live test you could call it. Recently I couldn’t get hold of Rescue Cleanse when I knew I had a urine test announced as requiring a sample in three days time by my employers.

I was up for promotion and I hadn’t realized that part of the process is drug screening anyone being considered for advancement.  All I could get my hands on at that short notice that I thought I could trust was Ultra Elminex.

I’m a heavy guy and a heavy smoker, and I passed. I was lucky because I thought about using fake urine, but another surprise was that they had paid for a supervised drug test, which could have been a real issue if I’d gone down that road. 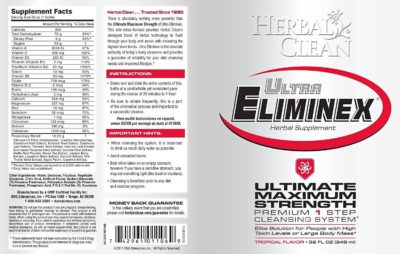 One additional thing I did do on top of drinking Ultra Eliminex to pass the drug test was that I had half a bottle of Toxin Rid pills at home as well.

So I used those for three days as well. That’s not enough to detox, but it’s certainly wouldn’t have done any harm, as toxin rid pills are very powerful and it would have helped to keep toxins flushing out of my system at a faster rate.

Which meant that I did basically a three-day pre-cleanse, and then 2 hours before the test I drank the Ultra Eliminex and passed a drug test.

So my advice at the end of this Ultra Eliminex review is to get hold of some toxin rid pills as well. Even if you have just 24 hours notice, chucking them down your throat at the maximum rate recommended will get more toxins out, making the job of any detox drink easier.

But in terms of reviewing Ultra Eliminex, I have to say it’s certainly on my recommended list now. It’s not just because of my pass, but it’s also that the vibe online is that this detox drink really works.

Sure it is expensive, it’s full price is $80, which is still around $25 more than Rescue Cleanse, but if you look around you can get it at reputable sites on offer for about $65, making it much better value.