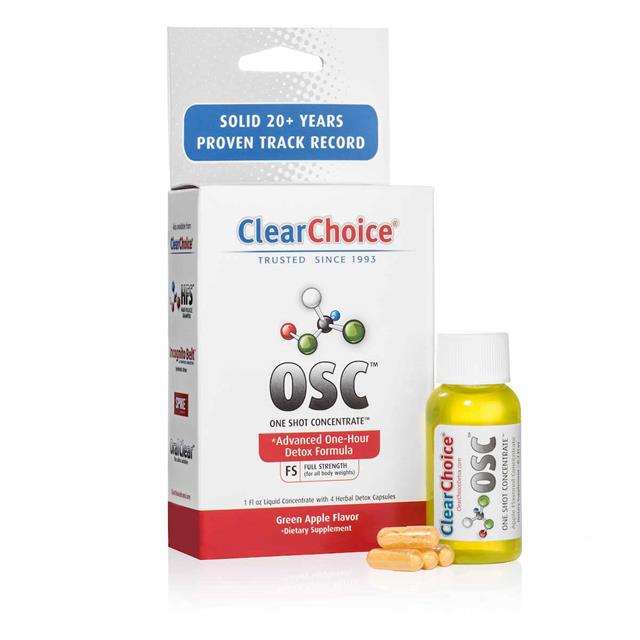 This one has passed me by until now because I’ve focused on Rescue Cleanse, the most well-known detox drink from Clear Choice. But have I missed out on an even more powerful alternative?

I haven’t used One Shot Concentrate detox drink live, but I did purchase one to review. As a heavy weed smoker, let’s see if it covers up the metabolites so I can pass a home drug test.

What Is One Shot Concentrate?

One Shot Concentrate detox drink is a product from Clear Choice. Clear Choice is probably the best-respected detox product company out there.

They sell the two best brands of synthetic urine, Sub Solution and Quick Luck. They sell Rescue Cleanse, one of the best detox drinks you can get your hands on. Plus, they sell Oral Clear, the most powerful solution for neutralizing saliva for a drug test as well.

One Shot Concentrate, or OSC, isn’t cheap. It’s $50, which is only five dollars cheaper than rescue cleanse. For that, you get a tiny 1 oz bottle of concentrated liquid, that you literally down like a shot. But does it work?

How To Use OSC Detox Drink

Is actually not as simple to use the One Shot Concentrate detox drink as the name implies. Yes, you get a 1 fluid ounce shot a detox liquid to take. But that’s not all you get in the box.

First, Clear Choice state on the box you should not go near any toxins the 72 hours. That’s quite a long time compared to other detox drinks which suggest 48 hours. You mustn’t eat for four hours before taking this either.

You basically down it in one. Then you take two of the cleansing pills that come with it, with 16 ounces of water. You wait 15 minutes, then repeat the process with the other pair of cleansing pills.

If you weigh 200 lbs or more, you should then drink another 8 ounces of water 15 minutes later.

You should be clean an hour later. But in that hour you should urinate as much as possible, and you shouldn’t drink or eat anything else.

So this isn’t just a concentrate detox drink. In effect, it’s like a concentrated version of Rescue Cleanse, that you pad out with quite a lot of extra water. Plus you get cleansing pills which give it more of a boost as well.

My Experience Testing One Shot Concentrate

So look, I bought a box of OSC out of curiosity when I was buying Rescue Cleanse and Sub Solution a few months back. It sat there waiting to be tested, and I’ve finally got round to doing it.

About me. I’m 200lbs at least, and I smoke weed every day. So I’m definitely a person who is exposed to high toxin levels, namely cannabis metabolites. I’m on the borderline of what OSC can cope with.

I deliberately didn’t smoke any cannabis for four days though. That’s a long time for me, but I was busy anyway. So that’s why I decided to test it, it was the ideal time to exceed the 72-hour instructions on the box.

I followed the exact instructions I’ve laid out for you here, and then waited one hour. During that hour I urinated three times.

I then took a home drug test and it was negative. So that is good and surprised me because I’m such a heavy weed smoker. But it does appear that One Shot Concentrate detox drink did mask the toxins in my body.

The caveat I’d say here is that it was a one-off test. On top of that, some home drug test kits aren’t 100% reliable, and I guess there is a small chance that a proper lab test results could have picked up metabolites due to higher sensitivity. On the surface though, OSC works.

Conclusion Of My One Shot Concentrate Detox Drink Review 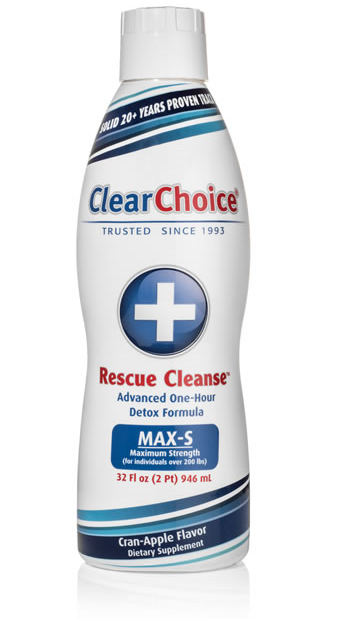 But now I’ve told you it works, would I recommend you use it? Well, the truth is I wouldn’t recommend it.

I just feel it’s a small concentrate of liquid and a lot of water. I feel you could have your sample rejected as diluted, something you can’t get if you use Rescue Cleanse, which doesn’t rely on such a volume of water.

Rescue Cleanse is also tried and trusted. I’ve tested it several times at home, and twice in live drug tests, and it’s passed every time, and that’s with a maximum of 48 hours abstaining.

I would also say that Clear Choice don’t make crap products. But Rescue Cleanse for me has a better track record. OSC Detox Drink costs $50, Rescue Cleanse 32OZ is $55, the difference only 5 bucks.

You could also use Ultra Eliminex, which is more expensive by $30, but it’s also the strongest drink on the market, tried and tested.

Plus, you could even just use Sub Solution or Quick Luck. Synthetic urine is far more likely to get you through a drug test, because it’s got far less margin for error, as long as you use one of these two brands from Clear Choice.