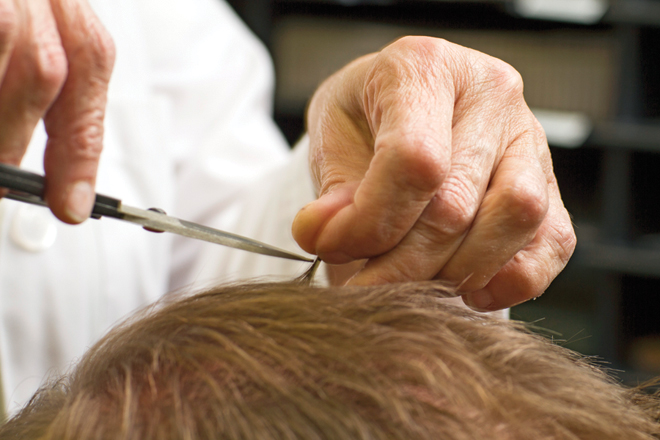 It’s an amazing fact that every year around 7% of US employees fail a drug test that uses a sample of hair.

The problem is that the hair follicle drug test is very thorough and difficult to pass if you have consumed drugs, cannabis or whatever, in the preceding three months.

Anyone who is more than a very occasional user could be caught, there are way too many detox products and guides online which is why it is essential people understand how to pass a hair drug test.

Because of the usual circumstances under which a hair follicle test is commissioned, the consequences are usually more serious failing.

Which is why it’s important to get proper information on ways you can pass a hair follicle drug test so that you can prepare for that day when you are called to take one.

Who Uses A Hair Test And Why They Do

The hair follicle drug test is a more reliable snapshot of a person’s recent drug history than any other type of test.

The urine, blood, and saliva tests are only reliable for a few days, or in the case of the urine test with cannabis THC, around three weeks.

That’s why certain employees, the government and law enforcement agencies tend to look to the hair follicle drug test when they need certainty around a person’s drug using history.

So anyone who works for the government comes into contact with them, or law enforcement, or is in a management position, or key position of responsibility could be at risk.

The hair follicle test costs a lot more than the other types of drug test available, but under certain circumstances that extra cost is deemed appropriate.

The term hair follicle drug test is actually inaccurate. The hair follicles are not tested in any way at all.

What happens is that when you take any sort of drug the byproducts of it to work their way through your system. These are metabolites, which are created by the body’s absorption of the active ingredients of the drug, for example in weed it’s THC.

So as your hair grows, it produces a recording of your drug usage. Which makes it an incredibly accurate way to test.

The standard sample length is 1.5 inches, and as hair grows at an average of 0.5 inches a month, it gives the lab 90 days of drug history. Don’t think that the metabolites vanish at any time, it’s been recorded that researchers found traces of opiate use in hair samples 200 years old, including hair samples from the poet John Keats.

So the only way around a hair follicle test is to somehow draw the metabolites out of the hair strands before you take it. You can read more 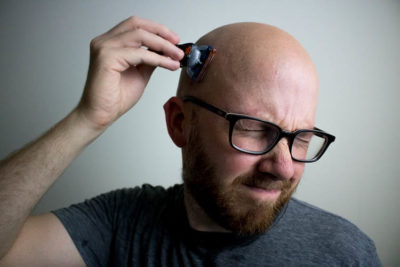 So…Just Shave Your Head Then?

No!  The people at the labs are not stupid, they will spot that a mile off. Even if you are genuinely a sufferer of pattern baldness, and you do shave your head, they will just take a sample from hair elsewhere on the body.

And if they can’t take a suitable sample elsewhere, then they will probably fail you immediately and refer you back to the people who authorized the test.

On top of that, such a stupid action could provoke urine, blood or saliva test, or all three, for which you will not have prepared.

How To Pass A Hair Follicle Test With Home Remedies

One of the most common ways people look to pass a drug test is through using home remedies. When we mean home remedies, we are talking about household products and easily obtainable stuff like vinegar and baking soda.

The bottom line here is that none of them work. If a simple home remedy could get you through any type of drug test then they would be no industry selling you products, and no websites telling you things that do work.

The other reason people use home remedies is shortness of time, meaning they have not had time to get proper products, or they don’t want to spend any money. Crazy strategy.

If you want to pass a hair drug test, you going to need a proper hair drug test kit, and you can’t just buy one of those complete, or make it up from home products.

But there are methods out there that work. Not every time, but they increase your chances dramatically.

One of the most famous is the “Jerry G” method, unsurprisingly originally concocted by a cannabis user called Jerry G.

It was developed around the principle that you had to penetrate the hair in order to wash out the toxins contained within it. The hair consists of three layers:

Basically, the method involves using something with a high pH level, usually, ammonia, because it lifts the cuticles much higher, revealing the cortex better.

It consists of two stages, opening up the cuticles and removing the toxins during each stage, and during the second stage also conditioning the hair.

The problem with this method is that it uses ammonia mostly, which can permanently damage the hair and scalp. So you might get through a drug test, but your hair could also be ruined forever.

There is a better method called the Macujo method, which has a higher rate of success and doesn’t ruin the hair. We’ll talk about that in a little while.

One thing you’ll come across in your research, or panic, is a plethora of toxin removing shampoos out there for you to buy.

Ranging from a few dollars to well over a hundred dollars, the claims will be equally as big: use this and you will pass a hair drug test.

The claim is that the ingredients will open up the cuticles and flush out the toxins all in one go, and then condition your hair making everything in the world wonderful.

You can then dance into your hair follicle test, submit your sample on a silver platter, and skip away happy in the knowledge you will pass.

Except you won’t.  99 times out of 100 the claims made about these toxin removing shampoos are pure bullshit. Often they are even just normal shampoos. They prey on the stupid and desperate to make money. But there is an exception. 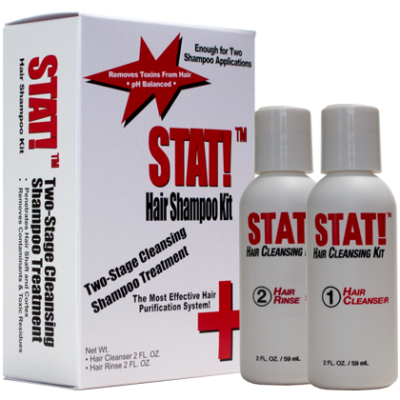 There was one detox shampoo which was different. It is called Aloe Rid.  It was an incredibly strong formulation that had the potential to truly wash out the toxins from under the cuticles.

It’s sold by the bucketful and was widely available. But the problem was it was too strong the general use. And you see it wasn’t designed as a drug detox shampoo in the first place. So the company who made it redesigned it, removing the key ingredient which could launch a nuclear assault on the toxins.

But thankfully it is still available in the old formula. But it’s not made anymore. But you can get it either in the old Nexxus company bottles online, or a brand-new repackaging through testclear.com.

This stuff ain’t cheap mind you. You’ll be paying $235 for a bottle of Aloe Rid& Zydot ultra clean combo. That will probably get you through a single test because you need to use it every day for at least a week leading up to the hair follicle sample test.

And also it’s not a 100% guarantee, more like 90% guarantee. So it’s still a risk if you use it on its own, but a relatively acceptable one.

However, let’s now talk about the method which is a nuclear weapon on your hair. You’ll need Aloe Rid, plus a few other ingredients. But it works for any type of hair, including long hair and dreadlocks. 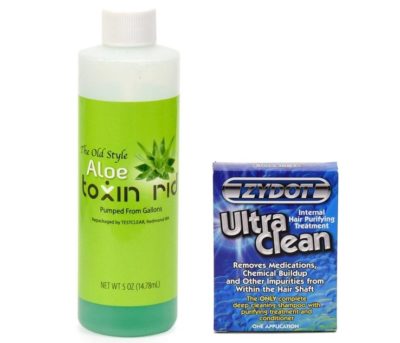 How To Pass A Hair Drug Test: The Macujo Method

We said at the start of this that there is no such thing as a hair drug test kit out there. And the drug test shampoos that you can buy are not reliable, even old formula Aloe Rid.

But you can almost guarantee to pass a hair drug test if you use the Macujo method. It doesn’t use ammonia, so you won’t lose your hair, and right back to 2003 when it was first circulating on the Internet, people have been reporting a high success rate with it.

So let’s take a look at how to pass a hair drug test with the macujo method.

As we said before, you need to first open up the cuticles of the hair to reveal the cortex. This is where the metabolites are stored, and where they need to be flushed out from.

So the whole method is similar to Jerry G, but users different process and products to make it more efficient.

You’ll also want to protect your eyes, face, and hands during the process as you will be using ingredients which can cause irritation. 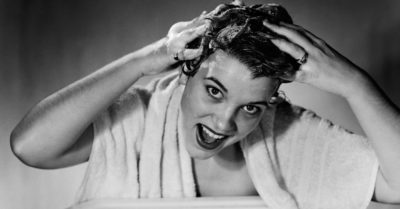 That’s it for the macujo method, this is how to pass a hair drug test, if you do it right you will pass it guaranteed. The precaution you need to take afterward is to make sure you use fresh combs or brushes and don’t use items like hoodies, caps, or pillows that could be contaminated with toxins.

If you are a heavy user you may have to use the macujo method more than 7 times in the week leading up to your test (7-10 is the safest).

If you have seven days do it every day, if you have 3-4 only, use it twice a day.

An additional step is to use Aloe Rid again and Zydot Ultra Clean on the morning of the test, just to make sure.

You Can Pass A Hair Drug Test

So that’s everything you need to know how to pass a hair drug test. You can buy the old formula of Aloe Toxin Rid&Zydot Ultra Clean Combo HERE. It’s also a good idea to purchase a home hair drug test kit to test yourself.

Home remedies don’t work. Yes, the macujo method contains household products, but they are combined in a process that opens up the cuticles of the hair and strips out the toxins.

None of those products work on their own as home remedies to pass a hair drug test.

You know you can’t get around a hair drug test by shaving your body hair, having fake hair extensions in, or any nonsense like that. You’ll just look stupid and get referred back as a cheat.

But you now also know that with some money and time investment you can get through a hair strand test with a greater than 90% success rate using the macujo method.